BIRMINGHAM –  Cahaba Brewing Company began in 2011 as a basement brewery and hobby among friends. By September 2012, the pals had opened a retail space. 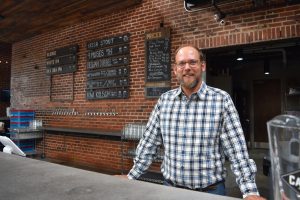 “We wanted to be a part of the community and really focus on the beer,” said Andrew Pharo, chief financial officer and managing partner. The goal was to make Birmingham “a cooler and better scene,” while making a great product, he said.

The company is now in its sixth year of making that goal a reality. Cahaba Brewing has become an integral part of attracting new businesses to the Avondale neighborhood of Birmingham, while attracting millennials to the area, said Loren Traylor, former vice president for investor relations for the Birmingham Business Alliance. BBA nominated Pharo as a Retailer of the Year.

Dedication to community and expansion into an architecturally innovative facility earned Pharo and The Cahaba Brewing Company the title of Alabama’s 2017 Silver Retailer of the Year in the Annual Sales $1 Million to $5 Million category. The Alabama Retail Association honored Pharo at a luncheon in Birmingham held in cooperation with the University of Alabama at Birmingham’s Collat School of Business.

Pharo came to the company in mid-2014 to make operational changes and execute an expansion strategy. His biggest priority was to turn a good product into profit. “We decided that the best way to achieve that goal was to scale it up,” Pharo said.

In 2016, they did just that. After moving the company to the long-abandoned Continental Gin building, Cahaba Brewing experienced a 135 percent growth in total sales, increased its capacity 10-fold, started serving seven times the customers it once did and added an almost 5,000-square-foot events space.

The Retailer of the Year judges said Cahaba Brewing is part of a new brand of economic development for the state.

The Cahaba Brewing Company was one of 14 retail businesses honored as Retailers of the Year. This year’s winners came from a pool of more than 90 nominees. The Alabama Retailer of the Year awards, started in 1999, honor retailers who have demonstrated growth, innovation and a commitment to their respective communities.

“Andrew Pharo is a retailer of the year EVERY year to the Cahaba Brewing customers, the company’s 30 employees and the Birmingham community,” said Alabama Retail Association President Rick Brown.

Full list of this year’s Retailers of the Year

Previous Retailers of the Year

Alabama’s back-to-school sales tax holiday kicked off the school buying season in our state, and while Alabama shoppers have been steadily ticking off items on their lists, they still have more buying to do. Our state’s retailers have what parents…

As of 10 a.m. Friday, June 18, eight Alabama counties were placed under a state of emergency related to Tropical Storm Claudette, based on a proclamation issued Monday, June 21. The storm impacted Alabama on Saturday, June 19. Governor’s Proclamation…