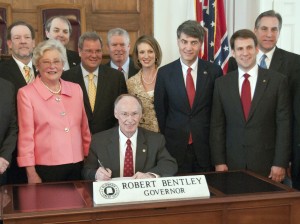 The new law (Act No. 2014-46) creates the Alabama Tax Tribunal, consisting of at least one, but no more than three judges. The tribunal will be in place by Oct. 1. Gov. Robert Bentley appointed Bill Thompson as the tribunal’s chief judge.

The governor described the newly created entity as an “impartial forum for taxpayers to challenge tax assessments. It separates the adjudicator from the collector,” he said.

“If you have a tax dispute in Alabama, you will get a fair shake,” said Taylor, who assumed the bill sponsorship after former Sen. Ben Brooks, R-Mobile, left the Alabama Legislature to become a circuit judge.

The Business Associations’ Tax Coalition (BATC), a coalition of 27 business trade associations, chaired by Alabama Retail Association President Rick Brown, has advocated for an independent tax appeals process for at least 15 years and is elated to see the new process put into action.

Almost 4 million Alabamians 16 and older became eligible for COVID-19 vaccines April 5, by the authority of the governor and state health officer. On May 13, the state expanded eligibility to those 12 and older. “Our greatest weapon against…

Member News: Homewood businesses among statewide Retailers of the Year

MOBILE – Melissa M. Cross, president of McAleer’s Office Furniture in Mobile, today was named Alabama’s 2021 Silver Retailer of the Year in the Annual Sales More Than $5 Million category. McAleer’s is one of 11 businesses honored as Retailers…