BIRMINGHAM – The Alabama Retail Association, in cooperation with the University of Alabama at Birmingham’s Collat School of Business, today recognized outstanding Alabama retailers representing 13 retail businesses with operations in 51 Alabama cities and 30 other states as Retailers of the Year. This year’s winners came from a pool of almost 70 nominees. The presentations were made during the 2015 Alabama Retail Day Luncheon in Birmingham. Stu Crum, president of Bridgestone Retail Operations, made the keynote address. This marked the 16th presentation of the Retailer of the Year Awards since 1999. 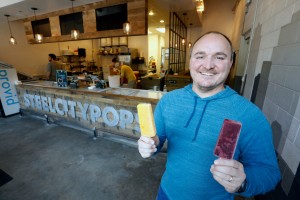 “Jim at Steel City Pops is truly an inspiring entrepreneur. He has developed quite a buzz,” said Krista Wood, leasing associate at Bayer Properties, who nominated Watkins for the award. Steel City Pops sells their tasty, fresh products at storefront locations, carts in the cities where they operate, as well as an Airstream trailer. Since opening a little more than three years ago, Watkins has expanded from the original location in Homewood, to six locations in Alabama and three in Texas. “In addition to being wildly successful, Jim is also heavily invested in giving back. He has generously partnered with several local and global charities and has also reached out and mentored several small start-up retailers, teaching them how to run a business,” Wood added.

In addition to the impressive business growth over the past three years, Steel City Pops is also lauded for its innovation and creativity in marketing and branding. Last year, Watkins and his team created a new website, which won a Gold Addy for Digital Advertising at the 2015 American Advertising Awards. They also created a “Pop Cart” counter display to hold business cards and fliers for catering and vending capabilities, which won a Gold Addy for Point of Purchase at the 2015 American Advertising Awards. Watkins says they are honored to be recognized for their work but feel most proud to bring national attention to their home city. “Our passion for being local stems from the selection of a potential retail space and follows through to the intention to which we devote our energy there,” said Watkins. “We are very centered on being a part of the community and working with other retailers and partners of the community where our stores are located.”

The company credits most of its popularity to brand loyalty and recognition from and to customers. They recently handed out pops to college students moving into dorms and invest heavily into social media strategies across multiple channels to increase awareness of the company.

Alabama Retail Association President Rick Brown said, “Jim Watkins is a retailer of the year EVERY year to his customers, 145 employees and the nine communities where Steel City Pops operates.”

Chuck’s Fish in Tuscaloosa to offer free Thanksgiving meal to-go (The Tuscaloosa News, Nov. 22, 2020) Member since 2016 When Alabama Retail or its members make the news, we’ll link the articles below. Email Nancy Dennis when your store makes…