Alabama taxes remitted by sellers located in and outside our state declined almost 4.5% in April compared with the same month last year. April was the month most of Alabama’s sales-dependent businesses were either closed or operating in only limited ways due to the coronavirus pandemic.

State sales tax collections for the month of April were down 12.36% over last year, while the collections remitted through the simplified sellers use tax (SSUT) program increased 84.3%, according to the Alabama Department of Revenue’s May abstract. April sales taxes were due May 20th, but the deadline was extended to June 1 for some sellers due to the pandemic. April collections are not necessarily reflected on the May abstract. 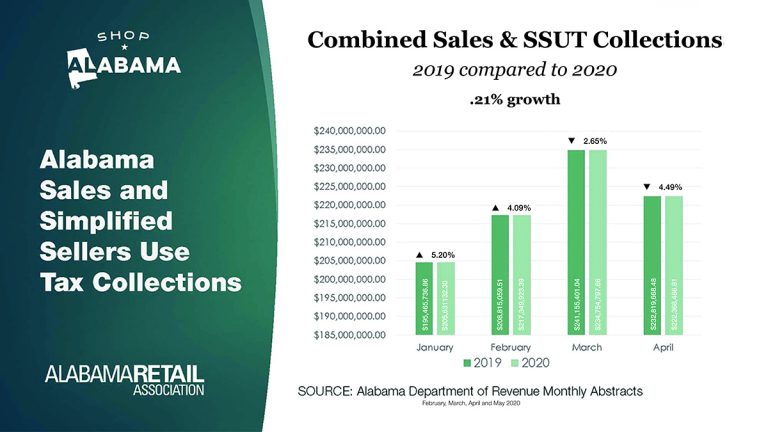 Taxes remitted through the simplified sellers use tax program comes primarily from remote, online-only merchants. Last April, the simplified sellers use tax collections accounted for slightly more than 8% of the remissions made by businesses on purchases in Alabama. That percentage (15.72%) almost doubled this April while Alabamians stayed home rather than go to stores or restaurants to purchase their daily needs.

“It is more important than ever to shop local, whether you shop in store or online,” said Alabama Retail President Rick Brown of the latest numbers available on taxed purchases. “When you shop local, your money remains in your community, it turns over numerous times and it keeps local businesses open and contributing to their communities.”

The Alabama Revenue Department’s monthly abstract reflects sales tax collections on general merchandise, restaurant and other food service, automobiles, machinery and vending. Collections made through the state’s simplified sellers use tax is a separate line item on the abstract. The Alabama Retail Association combines the two collection sources to get a better indicator of overall taxed spending in our state.

The numbers reported in the monthly abstract include only payments received during a particular month, according to the Alabama Revenue Department. For the months of February, March and April, the department allowed certain small retailers and restaurants to wait until as late as June 1 to remit sales taxes due without a late penalty.

Alabama retailers such as grocery stores, home improvement/hardware stores and pharmacies that were open reported good sales to Alabama Retail, but most retailers were closed throughout the month of April, operating only through curbside, delivery and online fulfillment. Throughout April, restaurants and bars operated only through curbside and delivery. Retailers were able to open under half capacity May 1 and restaurants could open with tables six-feet apart May 11. Tax collections from May sales won’t be on state abstracts until July or even August.

“We won’t know until much later in the year how Alabama’s recovery is actually going,” said Brown, “but I know Alabama’s retailers and restaurants will lead that recovery. They have been putting people back to work, pivoting to make their businesses safe for their customers and employees and innovating to serve customers however those customers prefer.”

*As contained in February, March, April and May 2020 abstracts compared to abstracts for those months in 2019.

The Alabama Retail Association represents retailers, the largest private employer in the state of Alabama, before the Alabama Legislature and the U.S. Congress. Through sales of food, clothing, furniture, medicine and more, our 4,300 independent merchant and national company members touch almost every aspect of daily living. Since 1943, we’ve worked to promote what’s best for the retail industry in Alabama. Whether voicing the retail view when public policy is made, educating members about issues that impact them, negotiating rates for benefits and services or communicating the retail story, the Alabama Retail Association and its members are better together.