CULLMAN / BIRMINGHAM – For the 17 years it has been in business, Rumors Deli has continuously held the title of “Best Deli” and “Best Sandwiches” in Cullman. The Cullman Area Chamber of Commerce this year named the business as its Small Business of the Year. 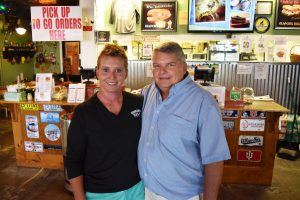 Today, owners Ralph and Annette Harris and Rumors Deli add another title to their long list of accolades: Alabama’s 2017 Silver Retailer of the Year Award in the Annual Sales Less Than $1 Million category. The Alabama Retail Association honored the Harrises at the Retail Day luncheon in Birmingham, which is held in cooperation with the University of Alabama at Birmingham’s Collat School of Business.

“Everybody knows Ralph and Annette,” said Margaret Hamm, owner of nearby Monograms Plus of Cullman, who nominated the Harrises for the award. “And they know their customers,” she added.

“They have built this business sandwich by sandwich,” said Hamm. Whether it’s the “Mouth of the South,” the “Hearsay” or the “Blabbermouth,” she said, “everybody has their favorite.” For Hamm, it is “The Tattletale” – smoked turkey, smoked cheddar on a roll with mayonnaise.

In 2018, Rumors will move to a new, larger location, add a pick-up window and expand its breakfast offerings, private party rentals and catering. This will be the second move for the breakfast-lunch restaurant. The first time, a feature in Southern Living helped make the move and increased space successful. Twice since then, Rumors Deli recipes have been published in Southern Living cookbooks, including “Miss Isabel’s Secret,” a dessert named after and based on a recipe by Hamm’s mother. The TV show “Catfish” and HBO have filmed in the restaurant.

Rumors feeds Cullman and diners from all over who have read or heard about its great food. Each year during the week of Oktoberfest, Annette makes 500 pounds of German potato salad based on her grandmother’s recipe.

“You could not ask for a better neighbor,” said Hamm. “Although Rumors is not a bar, what Cheers was to Boston, Rumors is to Cullman.”

The Retailer of the Year judges said they “hope the move and expansion continues Rumors’ success story.”

Rumors Deli was one of 14 retail businesses honored today as Retailers of the Year. This year’s winners came from a pool of more than 90 nominees. The Alabama Retailer of the Year awards program, started in 1999, honors outstanding retailers who have demonstrated growth, innovation and a commitment to their respective communities.

“Ralph and Annette Harris are retailers of the year EVERY year to the customers of Rumors Deli, their 12 employees and the Cullman community,” said ARA President Rick Brown.

Full list of this year’s Retailers of the Year

Previous Retailers of the Year

Alabama stores prepare for tax-free weekend (WIAT, CBS42, July 14, 2021) Featuring the Pants Store, Member since 1992 When Alabama Retail or its members make the news, we’ll link the articles below. Email Nancy Dennis when your store makes the…

After July 6, 2021, Alabama ceased to be under a state of emergency due to COVID-19, the disease caused by the novel human coronavirus. A total of 27 supplemental proclamations were issued between March 13, 2020, and July 6, 2021…

Shea Brennaman recently joined Alabama Retail Comp, the state’s most cost-effective workers’ compensation fund for retailers and other small businesses, as a marketing representative. Brennaman came to ARC from Decatur City Schools, where she worked as a fourth-grade teacher and…