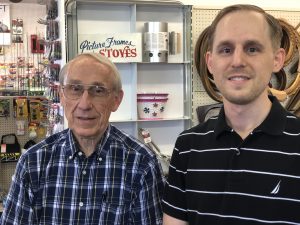 Raymond Young and his son Jeff.

“People ask me when I am going to retire, and I say, ‘I retired 14 years ago,’ ” said Raymond Young, owner of Mary Carter Store in Cullman. “I do this for pleasure because I enjoy it. If you enjoy something, it’s not work.”

Raymond loves his work so much, you can find him at his store six days a week, alongside his family. His wife, Brenda; sons, Jeff and Jeremy; daughter, Jennifer; and Raymond’s brother-in-law Fred Osborne, all work in the store, too.

“People can tell that there is a different type of cohesion when they come in; we aren’t just coworkers, we’re family,” added Jeff, Raymond’s oldest son.

DECIDING TO GO ‘ALL-IN’
It was 1964 when Raymond opened his store in downtown Cullman. At the time, he was also a full-time teacher, so the store was small and only sold paint. 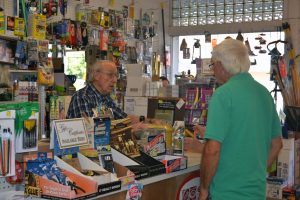 Over the years, he continually added merchandise to the inventory to complement seasonal requests, and before he knew it, he had a decision to make.

“It grew to the point where I either had to quit teaching, give up the store or vice-versa. I decided to go full time with the store,” said Raymond.

The name Mary Carter was a paint store franchise. While the brand went out of business in the 1980s, Raymond decided to keep the name, and today, Mary Carter is a one-of-a-kind hardware and general merchandise store with four separate but connected departments. It still offers a large selection of paint and painting supplies, but now carries everything from fishing tackle to Radio Flyer wagons to ice cream freezers and everything in between. Mary Carter Store is also known for its framing shop, which Fred oversees. It was named “Best Frame Shop” in 2017 by readers of the Cullman Times newspaper.

MIXING IN MODERN
Jeff, who graduated from the Georgia Institute of Technology, brought his technical education and expertise back to the store, upgrading software, phone and point-of-sale systems. He also built up the store’s high-tech automotive key and remote capabilities, making it one of the fastest growing components of the business. 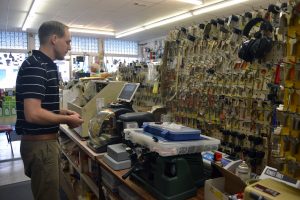 “Where else can you get an extra OEM 2017 Nissan Altima proximity remote and buy a cast-iron skillet and a box of live fishing worms all under one roof?” asked Jeff.

While the store’s physical growth has almost eclipsed an entire city block in downtown Cullman, that’s not the only eclipse phenomenon that’s impacted the family business.

Back in August 2017, when everyone seemed to be scrambling to get their hands on a pair of solar eclipse glasses, Mary Carter Store had several thousand pair on hand, thanks to Jeff’s foresight.

“We sold almost 13,000 pairs of solar eclipse safety glasses in four days. We paid a little over $4 a pair for the glasses and sold them for $4.99 a pair. Our main measure of success was that we protected 13,000 pairs of eyeballs,” Jeff explained.

Everyone working at the Mary Carter Store is family, including patriarch Raymond Young, who opened the store in 1964.

Being good people and serving customers well is something the Youngs feel is their duty and responsibility. Right now, Jeff, Raymond and the rest of the family have stocked the store with emergency preparedness items for Alabama’s severe weather preparedness sales tax holiday, which is observed the fourth full weekend in February.

Preparing for severe weather is personal for the Youngs, as Mary Carter store itself has sustained significant damage from two separate tornados; once in the early ‘90s and most recently in 2011, which left much of downtown Cullman in disarray.

“That year, we were just giving people tarps and selling supplies, just doing anything in order to help, even though we suffered just as much damage,” said Jeff. “Now, we make sure we always have plenty of those items, and the tax holiday is a good time for families to stock up,” he added.

MEMBER SINCE 1985: Mary Carter Store at 104 4th Street SE in Cullman is open from 8 a.m. to 5:30 p.m. Monday through Saturday. Visit online at marycarter.com

FUTURE DREAMS
For the Young family and Mary Carter Store, metrics in the traditional sense are not used. Raymond explains that productivity is measured through candid conversations over dinner and targeted questions and answers exchanged throughout the day. There are, however, continued plans to adapt to modern consumer preferences.

“Our next technological investment will be a new point-of-sale system, working with an online sales store. We want to create a bridge into the 21st century,” Jeff said.

While the family works to ensure the business remains relevant, they plan to never change what’s made their business successful for more than half a century.

“Patience, gratitude and humility have gotten us this far and will continue to ensure our success in making our promises, plans, and dreams into actions,” said Jeff.

You can find this article on Pages 4-5 in the
February 2019 issue of Alabama Retailer magazine.

Previous Entry: We’ve got just what you need to know about the Wayfair decision
Next Entry: Threat of winter storm prompts Alabama state of emergency

Alabama’s back-to-school sales tax holiday kicked off the school buying season in our state, and while Alabama shoppers have been steadily ticking off items on their lists, they still have more buying to do. Our state’s retailers have what parents…

As of 10 a.m. Friday, June 18, eight Alabama counties were placed under a state of emergency related to Tropical Storm Claudette, based on a proclamation issued Monday, June 21. The storm impacted Alabama on Saturday, June 19. Governor’s Proclamation…