Shoppers in Alabama are expected to spend half a billion more during the holidays this year than last year, creating the strongest holiday shopping season on record for the state.

During the holiday shopping months of November and December, Alabamians are expected to spend more than $12 billion, based on the Alabama Retail Association’s prediction of taxed sales for those months. That represents a 4.5 percent increase beyond the $11.7 billion spent in the 2017 holiday shopping period.

Through October of this year, Alabama averaged 4.57 percent growth in taxable sales each month over the same month last year. In the same period, the state of Alabama has also collected almost $69 million in sales taxes from out-of-state, online-only retailers, who have remitted through the Simplified Sellers Use Tax program and the state’s economic nexus rule. Alabama Retail Association’s 4.5 percent holiday growth prediction is for all holiday taxed sales, including those remitted from remote sellers.

“Shop Alabama for the Holidays” Tour to Visit Nine Cities 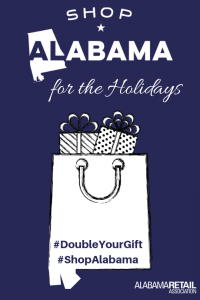 Alabama Retail Association will soon kick off its third annual Shop Alabama for the Holidays tour. The statewide holiday shopping initiative will visit eight Alabama cities to celebrate and rally support for local retailers, just in time for the busiest shopping weeks of the year. The tour will make stops in Clanton, Cullman, Dothan, Huntsville, Montgomery, Opelika, Orange Beach and Scottsboro.

A community rally and news conference is planned in each city in conjunction with city and business leaders, chamber representatives and local retailers. As part of the event, Alabama Retail will announce its 2018 holiday hashtag campaign for the state, #DoubleYourGift.

Shop Alabama for the Holidays encourages residents to create a ripple effect in their community by keeping their holiday shopping, dining and leisure spending local. The tour also celebrates the experiences, traditions and contributions local businesses bring to the holiday season.

Black Friday Predicted to be Busiest Shopping Day of the Year

Despite the continued growth of online shopping, Alabama’s retail industry remains strong. Online purchasing still only accounts for about 10 percent of all sales. According to the National Retail Federation, retail is actually growing faster than the rest of the economy at large, buoyed by a confident consumer and a strong economy.

This year, Black Friday is expected to be the busiest shopping day of the year, followed by Super Saturday, which is the Saturday before Christmas. In fact, each weekend day in December made ShopperTrak’s annual survey of the 10 busiest holiday shopping days of 2018.

In addition, ShopperTrak looked at the busiest shopping hours, predicting the time between 2 p.m. and 4 p.m. as the time frame stores will see the most traffic.

State urges all Alabamians 16 and older to get COVID-19 vaccine; President sets goal of 70% to get at least one shot by July 4

The almost 4 million Alabamians who are 16 and older became eligible for COVID-19 vaccines April 5, the governor and state health officer announced April 2.  “I encourage every Alabamian 16 and up to get out and get your shots…