MONTGOMERY– Gov. Robert Bentley signed a proclamation declaring Tuesday, Oct. 6, as “Alabama Retail Day.” The day is designed to celebrate the retail industry in our state and the impact it has on Alabama and its communities. Retail, including food and beverage establishments, is Alabama’s top employer, supporting more than a quarter of jobs in our state.

“The retail industry has an enormous impact on Alabama’s economy,” Bentley said. “As one of the state’s largest industries, it’s important to recognize and support retailers across Alabama, which provide jobs to nearly half a million people. I am honored to proclaim Retail Day in the state of Alabama and support the retailers in our communities.”

According to a recent study from the National Retail Federation, Alabama’s more than 50,000 retail establishments directly and indirectly account for more than 16 percent of all labor income – more than any other private industry. They also supply vital income and property taxes to the state of Alabama, supporting this state as its economic backbone.

Rick Brown, president of the Alabama Retail Association, said, “Outside of government, retail is the industry sector that employs the most Alabamians. Alabama retailers support the state’s economy and communities; and the Alabama Retail Association supports its member retailers’ efforts to create an economic climate conducive to growing their businesses and adding even more jobs.”

RETAIL BY THE NUMBERS: 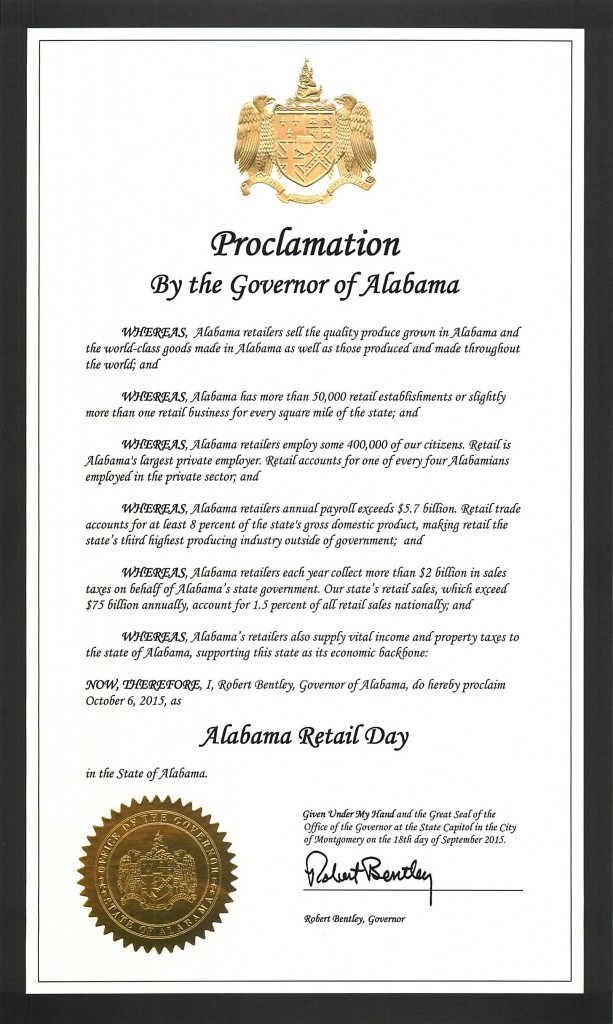 A link to the governor’s proclamation can be found here.

The Alabama Retail Association and the University of Alabama at Birmingham Collat School of Business will celebrate Alabama Retail Day during the 34th Annual Retail Day observance at a Birmingham luncheon Tuesday honoring the 2015 Alabama Retailers of the Year and featuring Stu Crum, president of Bridgestone Retail Operations as the keynote speaker.

The Alabama Retail Association represents retailers, the largest private employer in the state of Alabama, before the Alabama Legislature and the U.S. Congress. Our 4,000 independent merchant and national company members sell food, clothing, furniture and other general merchandise at more than 6,000 locations throughout Alabama. Alabama Retail promotes what is best for the retailing industry in Alabama and has been doing so since 1943. From legislation to education, through communication and member services, Alabama Retail members benefit from the value of membership in their association. Retail works!

On a 219-212 vote Saturday, Feb. 27, the U.S. House approved a $1.9 trillion coronavirus relief bill that includes raising the federal minimum wage. On Feb. 25, two days before the House vote, the U.S. Senate parliamentarian ruled that the…