“I’ve only done one thing in my life,” Terry Finley said surrounded by the objects of his chosen profession. What Terry does is sell books.

“In 1972, when I graduated from high school, I went to work for George Johnston at Johnston and Malone Bookstore in Auburn, Alabama,” Terry said among the stacks at the Brookwood Village Books-A-Million in Birmingham. “I paid my way through college, working 40 hours a week in a book store.”

After earning a degree in communications from Auburn University, Terry became an assistant book buyer for Rich’s Department Store in Atlanta, working for Faith Brunson, who at the time was the president of the American Booksellers Association.

“I became a publisher sales rep after that stent, and then began working in a Gateway Bookstore in Knoxville, Tennessee, a chain of 60 stores, which ultimately were bought by the predecessor of Books-A-Million. I ended up going to Books-A-Million 31 years ago,” said the president and chief executive officer of the second largest bookseller in the country.

And other than a brief interlude as a national sales manager for a New York publisher, Terry has been with Books-AMillion (BAM) ever since.

A Family Story
Terry plans to tell the story of Books-A-Million on Oct. 18 when he will be the keynote speaker for the 35th Annual Alabama Retail Day luncheon.

“There is a lot about our company, which people would be interested in and don’t know,” he said. “It is a fascinating family story, and I want to tell it.”

The Books-A-Million story is almost 100 years old, and every page was written in the state of Alabama.

“This is a great place to stay grounded,” Terry said. “We don’t anticipate ever leaving Alabama.”

“Clyde W. Anderson started the business in 1917 in Florence, Alabama,” he said. “He built a newsstand out of old piano crates” to sell

newspapers and magazines to the workmen building what is now Wilson Dam.

“The family is the same family that owns Books-A-Million today,” Terry said.

The four sons of Charles C. Anderson Sr., the founder’s son, each run one of the Anderson Companies.

“Mr. Anderson Sr., our chairman emeritus, is a wonderfully supportive, amazing entrepreneur who is still very active in all of the businesses,” said Terry. The story of how he built the businesses earned Anderson Sr. a Horatio Alger Award in 2015.

Terry credits Charles C. and Clyde B. Anderson for nurturing his career.

The Book Business is Back
Books-A-Million sells “books in every format imaginable. We sell hard cover, paperback, mass market paperback, digital and e-readers,” Terry said. At the Brookwood store in Birmingham and one in Portland, Maine, you can even have a 40- to 800-page book you wrote printed or have a hard-to-find book written by someone else printed.

In the 31 years Terry has been with the company, the industry has changed significantly.

“Books have probably been the most dramatically affected commodity by the internet,” he said.

When mega-online-retailer Amazon began in 1995, the first product it sold was books. “We had to face that reality a long time ago before most businesses had to face it. We have found ways to keep our stores relevant.” Terry said. Next came the digital era “with reading devices and people migrating from not buying physical books as much and reading on devices,” he said.

“We find ourselves today in a very different place than where we were 30 years ago, but the book business is back. People have decided that those devices maybe weren’t quite as exciting as they thought. Booksellers are thriving, both the independents and the chains,” Terry said.

Books-A-Million, the second largest chain in the country, operates some 260 stores in 31 states, employing more than 5,000 with more than 1,000 in Alabama.

Terry emphasizes that BAM stores aren’t just about books. “Increasingly book stores have become gift stores, and stores that are very responsive to what is going on in the popular culture,” he said.

Public vs. Private
“We have evolved in a lot of different directions as a company,” Terry said.

What Books-A-Million sells and how the company sells it isn’t the only change.

The company also has gone from private to public and back to private again.

“When we went public (in 1992), we did that to fund a rapid expansion,” said Terry. “At that point in time, super stores had just become the rage, and we wanted to grow quickly to become competitive in the markets that we serve.”

By December of 2015, Books-A-Million had again become a private company.

“As the business has evolved, we determined that it would be better and give us more flexibility to be a private company again. Frankly, as a private company, we will save a lot of money, because it is expensive to be a public company,” Terry said.

THE ESSENTIALS
Founded: 1917
Number of Employees: 5,190 nationwide; 1,092 in Alabama
Mentors: Charles C. and Clyde B. Anderson
Smart Move: Coming home to Books-A-Million
Learning Moment: My year in New York City!
Wisdom Shared: If you love what you do, no work is too hard, no challenge too great, no setback is beyond recovery. Instead, the rewards are even more sweet. 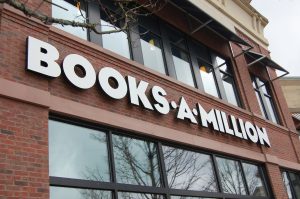 Birmingham-based Books-A-Million has 258 stores in 31 states, including 20 in Alabama.
It employs 5,190, including more than 1,000 in Alabama. The company was founded in 1917 in Florence. Learn more at booksamillion.com

This article is the cover story of the July 2016 Alabama Retailer.

On a 219-212 vote Saturday, Feb. 27, the U.S. House approved a $1.9 trillion coronavirus relief bill that includes raising the federal minimum wage. On Feb. 25, two days before the House vote, the U.S. Senate parliamentarian ruled that the…